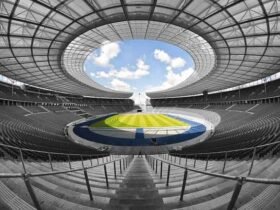 When Do The Olympics Start

March Madness for the year 2022 will start on 13th March 2022 with the Selection Sunday for Men’s tournament, followed by a series of events including men’s and women’s tournaments.

March madness implies that duration in the whole year when women’s and men’s tournaments for basketball are organized for colleges by NCAA. These tournaments are usually organized between mid-March and the onset of April.

This is a kind of tournament with one elimination. Sixty-eight teams participate in it from all around the US and attempt to prevail through all three weekends of the Game so that they can be awarded the honor of National Champions.

After the 1st weekend, the number of teams gets reduced to sixteen, successively the 2nd weekend leads the team number to 8 and after that to four, the last weekend that is the third one concentrates on the four selected teams which are semifinalists. Two winners from them fight for the honor of National Champions.

In 2022, the event will occur at Dayton, Ohio, with the first four & will continue to New Orleans with the final four. As mentioned above, selection Sunday for men is on March 13, 2022.

The event for women will commence on 14th March 2022 with Selection Monday.

Below is the entire schedule for the women’s tournament

Answer- It refers to March Madness as it starts in Mid-March, and people get crazy about it. It brings so much enthusiasm among people; several colleges from all around the US fight against each other to attain a spot in this game.

Answer- These tournaments start with 68 teams. Earlier, it used to have 64 teams, but recently, more teams have been added who attains their place through “play in” games.

So, be prepared for the craziness from mid of March to the Onset of April, and enjoy an event which is no less than a festival for all the fans of games, especially basketball. March Madness is pretty emotional for all those who love basketball, plus those who aspire to be awarded the honor of National Champions.